Over 130 people – half techies, half business folks – converged on Microsoft NERD 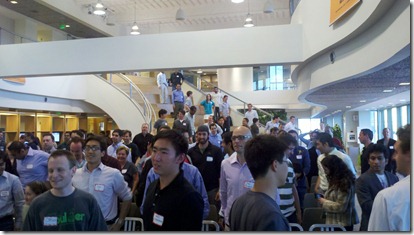 this weekend to start their own companies, have some fun & make some noise.

Friday night, 50 of them stood up and pitched their ideas in quick 60 second spots, interrupted only for a quick game of multiplayer rock-paper-scissors.

Pitches ran the gamut from gamifying entrepreneurship to games to solve the world’s biggest problems. From help with dating to help finding babysitters. Investing help through forecasting small company returns to a game that lets you invest in twitter hashtags.

One pitched a joke “I’m going to create a double rainbow – I mean, a Double Game Layer around the world!”. Some just sounded like it – DidWeShag.com for sharing those vital date details. And a guy named Sting pitched something about the Police (PayYourTicketsOnline.com).

There was some voting, but at the end of the night all that really mattered was weather you were willing to move forward with your idea. The 50 ideas dropped to 27, which eventually dropped to 16 – although part way through Saturday one of the entrepreneurs split from the startup he’d joined to return to his initial idea… And then there were 17.

Startups ranged in size from 2 to 15 people composed of everything from hard core techies to designers, business folks, 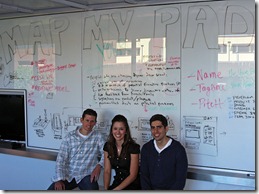 even a doctor who came to build a startup for helping other doctors. Mentors came in on Saturday to help startups with their ideas. Several teams got out of the building to validate their ideas with potential customers. One even got a paying customer!

There was much use of the ample whiteboards (we actually wiped NERD clear out of flip charts!) in brainstorming and sketching out design. Much head’s down coding. And unbelievable levels of creativity, passion, and energy – which 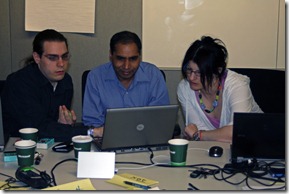 was good, as there wasn’t a whole lot of time for sleep over the weekend.

By Sunday things got real as teams worked towards the 5pm deadline when they’d get 5 minutes each to demo their startups & compete for some pretty swanky prizes including a day at MassChallenge bootcamp, meetings with angels, an XBox/Kinect for the team with the best use of Microsoft technology, and… a Keurig for the most energetic team!

I’m not sure which was more entertaining – the demos themselves, including MapMyPad who actually broke out into the Hokey Pokey (forward to 2:10 in this video to witness it yourself), or the twitter back channel.

Oh You Kids. Ensuring your inheritance.
“I named this company. In exchange for 25% equity or a mojito” @JoshSamBob

My Hobby Hub. Everyone has a talent to share.
“Does Hobby Hub have a Pirate I can sail with?” @scottefein

VidWheel. Create video channels of anything you could watch online.
“Pandora for video. that’s got p0rn written all over, and that means lots o money!” @412clifton

IdeaPhy. Turn your ideas into action.
“Lets founders get crowdsourced feedback on their ideas. momma always said to share.” @412clifton

PrescribableApps. Leveraging collaborative care for doctor-patient synergy.
“Need to monitor your mental health? Now there’s an @rxapps for that” @412clifton
“I’m concerned with the security of this app. Especially if it’s tracking my sexual desires.” @moolawn

eForecqst. Forecasting tomorrow’s gems.
“An interesting idea, which might be helpful for individual investors like myself.” @BrienBuckman
“I’d use this service.” @scottefein

HereHype. Connecting merchants downtime with students free time.
“Seems to be a flash groupon with lots of high-fives” @jtagen
“I wonder if they realize they look kinda like the Winkelvoss Twins…” @scottefein

PocketRoster. Always keep your members at your fingertips!
“A roster in your pocket.” @scottefein
“Probably one of the most immediately useful things introduced at StartupWeekend Boston” @JarrettGoetz
“Hard to say the name with a straight face, but the app is fantastic” @jtagen

And, yup, CaseReportal won the XBox/Kinect for most awesome use of Microsoft technology – CONGRATS!!