Life in a Northern Town 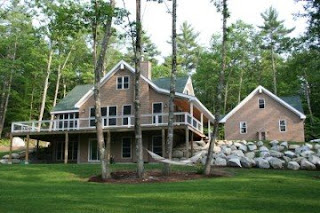 So, yesterday marked 1 month since I moved to my new home in the lakes region of New Hampshire and I’ve gotta say, I’m still waiting for the culture shock to set in.

I’ve never lived outside the Washington DC metropolitan area, never once – not even for school. So, upping and moving to the middle of nowhere, the sticks, north country – whatever you want to call it – have been kind of expecting the culture shock. But, maybe that’ll just have to wait for winter when we’re buried under too many feet of snow to get the door open so we can make it to the ski slopes.

I have to tell you a little bit about where I am. We’re on a peninsula called Moultonboro Neck or “The Neck” for short. So, just imagine, it’s 10 minutes minimum to get anywhere because it takes that long to drive off the neck. That’s 20 minutes minimum to go anywhere and get back. And, even then, at the end of the neck you’re just talking about a hardware store (closes at 5pm each night), a gas station, and – a bit further down – a cool little restaurant called The Bad Moose Cafe. The Bad Moose, BTW, particularly notable as its the only restaurant for about 30 minutes in either direction that’s open past 9pm, even on weekends! But, it’s a great place. Awesome food – steak, fajitas, yum. And they have live bands and a screened in porch you can eat and hang out on.

But, I digress. Our street, this kills me, our street is a little street, maybe 1/2 mile long, that has about 5-10 houses, most of which are seasonal so unoccupied most of the year. And then two –

not just one, but TWO – campgrounds on it. Camp Robindel is home to 300 girls for 7 weeks each summer. And then Geneva Point Center, more of a conference center/campground/retreat for adult gatherings, which our street is named for.

Now, what’s interesting is that on 2 separate occassions I’ve had to give my address to someone in a completely different town and when I say “Geneva Point Road” (with no other information, mind you), they say “oh! You’re on the neck!”

And then, there are other funny small town things we’re getting used to. For days after we moved in we got personal notes from our mailman, welcoming us to the neighborhood, telling us what a great house we had, “how do you like the pool?” (okay, to be clear, there is NO way anyone can tell we have an indoor pool from the mailbox). Another neighbor came by and gave me a complete history of the land, starting from its humble beginnings as a Turkey Farm in the 1800s. This neighbor, BTW, VERY important. You see, she’s the one that mans the ice cream booth at Geneva Point Center. Open every night at 8:00pm. Be sure to get there early because the line gets long fast! Especially on nights when some of the girls from Camp Robindel come over.

So, yeah, okay, we’re a 45 minute drive from the nearest decent grocery store. And, sure, we might be all the way up in North Country (although, technically, I think North Country doesn’t start until about 30 minutes up from us). But, it’s damn beautiful. The people are so wonderfully down to earth. And, hey, ice cream every night at 8:00. What more can you ask for??