Lean Startup in the Real World

It’s one thing to read about Lean Startup. It’s another to make it work with the nuances of your own startup. And so, just like in understanding our customers, sometimes you’ve just got to get out of the building and see how others are doing it.

Caomhan Connolly is a 21 year old entrepreneur from Dublin (“I’m from Ireland, like everyone else in Boston” 🙂 ).

Caomhan is the co-founder of Buz, a startup in ChinAccelerator (like a TechStars for China) that’s creating a hardware + software solution to help brick & mortar businesses get more customers through social media.

Buz recognized that brick & mortar businesses were having a lot of problems being effective in social media. They need to be savvy about social media, often having to hire marketing people, purchase facebook ads, etc… it can cost a lot of money. So, Buz started with a vision of how to help them.

They held early conversations with brick & mortar businesses to better understand their pain around customer acquisition & social media, and then set out to develop a solution for them.

Their idea: generate buzz through the business’s customers. Place a physical device at each location that allows customers to check-in with their social networks in exchange for rewards from the business. If the customer chooses to share their location with their friends (Partying at The Estate nightclub), they get a reward like free admission to the club. Now, their friends see they’re there, they want to be there too, and voila, more customers and buzz around the club.

Can you be Lean with Hardware?

This meant manufacturing hardware, which raised the question of whether they could be lean with hardware (long timelines, high costs, hard to make changes). But, they found a manufacturer in China that allowed them to create low cost devices built to order. They moved to China to be close to the factories so they could easily request changes as they pivoted and they chopped what was initially an 8 month product development timeline down to a 4 month MVP. 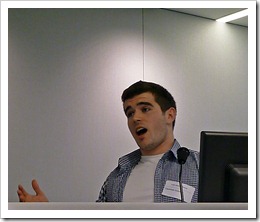 According to Caomhan, “Going door to door has been it for us… We’ve had a 95% pick up rate in the businesses I’ve met with, in contrast to only ~30% interest from those I spoke to on the phone.”

Being able to have a an actual physical device to show is obviously a part of that equation. With hardware, Caomhan explained, customers want to actually see it before buying into it.

Assumption: Nightclubs are a great target because there’s a lot of excitement and people want to go where their friends are.

Testing the Assumption: They piloted Buz at The Estate, one of Boston’s most popular nightclubs, on Saturday night.

The Results? The first test was a disaster. The WiFi dropped after only 5 minutes and the majority of people just wanted to go meet with each other, not spend time checking into the system.

Learned: Maybe clubs aren’t going to be best place because people just want to get in and meet with their friends. Perhaps there’s a pivot to bars, which they’re getting a lot of interest from in those door to door visits.

Next Up: We know why the businesses want to use this, but why do the consumers? There’s a whole other Customer Development effort that’s going to need to happen there if they’re going to find a way to make this work.

Sticking to your Vision

Listening to some of the feedback in the room, you can start to feel just how intimidating & painful customer development can be. Everyone had a different idea about what they should be doing different, and some were quite passionate about it!

One of the lean startup “MythBusters” is that Customer Development is NOT Customer-Dictatorship. It’s essential that you listen to customers/potential customers to learn what will work, but it’s equally important that you not let them pull you off your vision. The whole, if Henry Ford had asked his customers what they wanted, they would have said a faster horse...

There were lots of great suggestions made, such as:

There were also questions about whether Buz was really differentiating itself from other startups, like FourSquare, to which John Prendergast offered this most excellent advice in closing:

It’s important to find out what startups out there are doing similar things.

But then forget about them.

With a startup, it’s not about having a new & different idea. It’s about being valuable.

Differentiation is important, but only when someone actually cares.

What are your experiences implementing Lean Startup? Are there areas you’ve found particularly tricky in your own startups?