Last month, Jason Baptiste wrote a most excellent article on 14 Reasons Why You Need to Start a Startup. In it he said:

“They used to say that everyone should try to be a rockstar at least once in their lifetime. I’m going to add to that and say you should [also] be an entrepreneur”

My first thought was, wow! I think being part of a startup actually makes you a rockstar. I mean, you’re out there – doing things, creating things that nobody has ever done before! You’re pushing the edge on what’s possible and so making the world a little better for everyone. What could possibly be more rockstar like then changing the world?

My second was, even if you’re not at a startup or up on stage before millions of screaming fans, you should still be a rockstar. Because when you do that, when you put yourself out there and share what you’re doing – what you’re creating/thinking/building – with the world, I think only wonderful can come of it.

Anyone who knows me knows just how crazy whacked outside my comfort zone this job is for me. Let’s see, heads-down introverted coder one day, Microsoft’s Evangelist for Startups the next.  Mmmm. 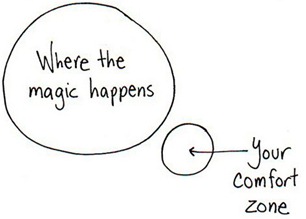 It can be intimidating as hell and there have been about a billion different directions in which I could take things. Some awesome. Some drowning in mediocrity. But the thing that most pushed me forward – past that edge of my comfort zone into (I hope) the awesome – has been this feeling that I’m a freakin’ rockstar.

Now, maybe that’s complete crap. I’m not actually sure all of my (90,000) coworkers would agree that all evangelists are rockstars. And certainly some of my friends think I’ve gone round the bend. But before I took the job my only exposure to evangelists had been as a very young programmer (working at my first startup) when I attended the Windows 95 Developer launch.

Do you remember that launch? With the Rolling Stones (Start Me Up) and Jay Leno (so easy, even a game show host can use it!). And then! coming out to every city were these people with the absolutely crazy title of “evangelists” to get the developers excited about it. They got up on a big stage, before a huge audience, and got us excited and gave us all sorts of goodies (I recall the Win 95 release candidate – zero-day warez! was particularly awesome). Wow! I just watched these people and thought they’re like rockstars, but for geeks. That is the coolest thing ever.

And then this year, totally unexpectedly – I find myself interviewing for an evangelist position. And that remains the image in my mind. I’m going to be a fucking rockstar for geeks – YEAH!

So what did that do? This belief in yourself – this belief that you rock – it gives you all sorts of permission to go out there and be awesome. In fact, it sets the expectation that you will be awesome.

It was only after I’d been here several months that I realized maybe that expectation was only in my own head (*sheepish grin*). But by then it didn’t matter because I was hooked. By then, I’d taken chances, pushed outside my comfort zone, tried new things, created new things and shared them with the world. And I only want to do more.

I believe that people are amazing. That everyone has it in them to do the most incredible things. To be rockstars, if not with a guitar then with the very things that make them unique. In Do More Faster, TechStars founder David Cohen encourages startups to focus on their passion. To…

“figure out what one thing you’re going to be the best in the world at doing”
(and then go do it!)

I think this is great advice for all of us. Startup or not – you can still be a rockstar and change the world.